On hiatus, I recently completed the Resistance Trilogy, three novels set in the resistance movements of the 1960s and '70s.

Volume One, Gates of Eden, a '60s novel of resistance, rebellion, and love, garnered a silver medal from the 2012 Independent Publishers Book Awards. 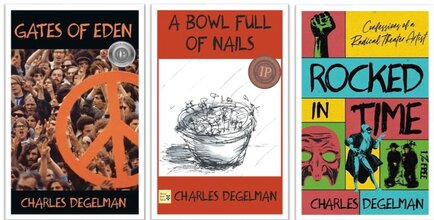 Volume Two, A Bowl Full of Nails, set in the counterculture of the 1970s, was a finalist in the Bellwether Competition, sponsored by Barbara Kingsolver. Nails took bronze in the 2015 Independent Publishers Book Awards. This tale, set high in the mountains of Colorado, made the mystery short list for IndieFab Book of the Year Award, sponsored by Foreword Reviews.

Volume Three of the Resistance Trilogy, Rocked in Time, slips behind the scenes of a blasphemous theater company hell-bent on toppling America’s Vietnam-era establishment with punch lines, pratfalls, and comic rebellion. 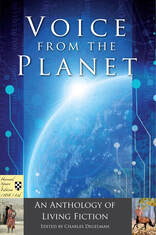 Impressions of two trips to Cuba as a writer and theater artist have been published in Cuba by Travelers Tales. Excerpts from my anthology, American Postcards, narrative snapshots of growing up absurd in the 1950s appear in Above Ground, an anthology of international fiction.

In 2010, I edited A Voice From the Planet, a globe-trotting anthology of short fiction, published by Harvard Square Editions.

My first screenplay, "Fifty-Second Street," garnered an award from the Diane Thomas Competition, sponsored by Amblin Entertainment and the UCLA Writers Program. "No Deposit, No Return," a reinhabitory thriller, is wandering the labyrinths of Hollywood.

My latest screenplay, "The Red Car," was a finalist in the American Zoetrope competition, sponsored by Francis Ford Coppola.

When the dust settled, I returned to my love, writing. In the 1990s I was swept up by the film world and the burgeoning digital industry where I wrote and produced documentary and educational films for TNT, Churchill Films, Pyramid Films, Philips Interactive Media, and others.

I polished my craft as writer and editor on staff at a Los Angeles-based educational organization while I produced original work for the stage and wrote fiction, screenplays, and political commentary.

I also had the great good fortune to study the art of fiction with John Rechy, novelist, essayist and recipient of PEN-USA-West's Lifetime Achievement Award.